We provide below a hyperlink to a thematic PDF, that was the precursor to the creation of the content of this website and accompanying book.  The PDF includes dedication – Subhakamana messages from amongst others Ms Joanna Lumley OBE, FRGS.  The PDF resource has a joint in-Nepal and UK / UK Nepali dimension approach.  This valuable resource can be accessed at UKNFS Nepal – Britain Bicentenary Exhibition Peoples-to-Peoples Educational Resource

The background to the PDF resource creation was an outcome of a Nepal Art Council (NAC) Nepal – Britain bicentenary exhibition, where the crucially important UK/British dimension was solely enabled by the UKNFS, under its lead, Alan Mercel-Sanca. Alan/the UKNFS provided hundreds of hours of work on communications with most of the UK’s leading national museums curators and archivists through the greatly appreciated introductions of Dr Mark Watson, RBGE Edinburgh’s Head of Flora – of the NAC exhibition is referenced at https://uknfs.org/april-2017-update-launch-of-the-nepal-art-council-uknfs-nepal-uk-bicentenary-exhibition/

In the 2014 – 2015 period, on one of the UKNFS’ CEO/Lead Alan Mercel-Sanca’s visits to Kathmandu and important meeting was held with Alan/the UKNFS at the NAC Building, with the NAC Vice President Mr Sagar Rana, and Mrs Swosti Rajbhandari, NAC Curator, and in conjunction with Alan UKNFS Arts Section (NIAP: www.creativenepal.co.uk) Nepal lead volunteer officer, Mr Deepak Tamrakar. 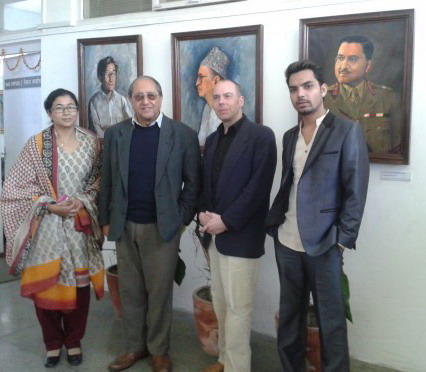 At the meeting Mr Rana laid out plans he had for an NAC, Nepal- Britain Society supported, Nepal-Britain Bicentenary Exhibition: in this he advised that while the British authorities were supportive, they couldn’t commit to funding or the crucial element of expertise and research time for securing, the central to the success of the initiative, images from famous British and London museums.

The request was made – could the UKNFS enable this?  The answer from the UKNFS was Yes, because the UKNFS realised the importance of such a project for transcultural learning (in both countries) and Peoples to Peoples benefits.    Work began soon on Alan’s return to the UK, with the starting point of contact to Dr Watson (mentioned above).  The breakthrough was made, and is recorded in the NAC ‘NEPAL – BRITAIN Bicentenary Exhibition 2017’ catalogue, where in Mr Rana’s words (page vii of the catalogue):

‘ … I was still reluctant to take up what seemed to be a rough task until I received an urgent message from Alan: the Victoria and Albert Museum had responded positively and sent images from their collection for NAC to exhibit …’ 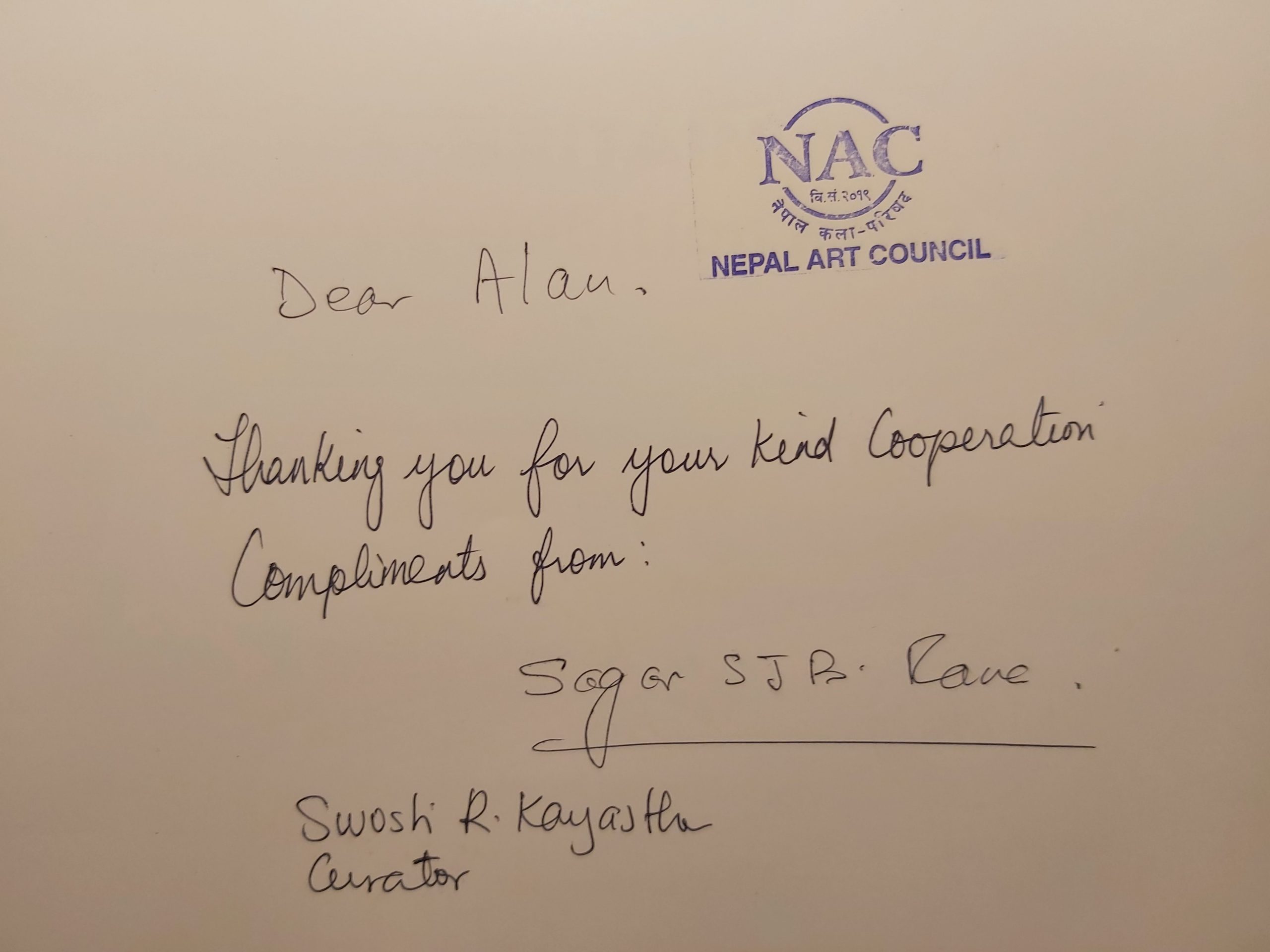 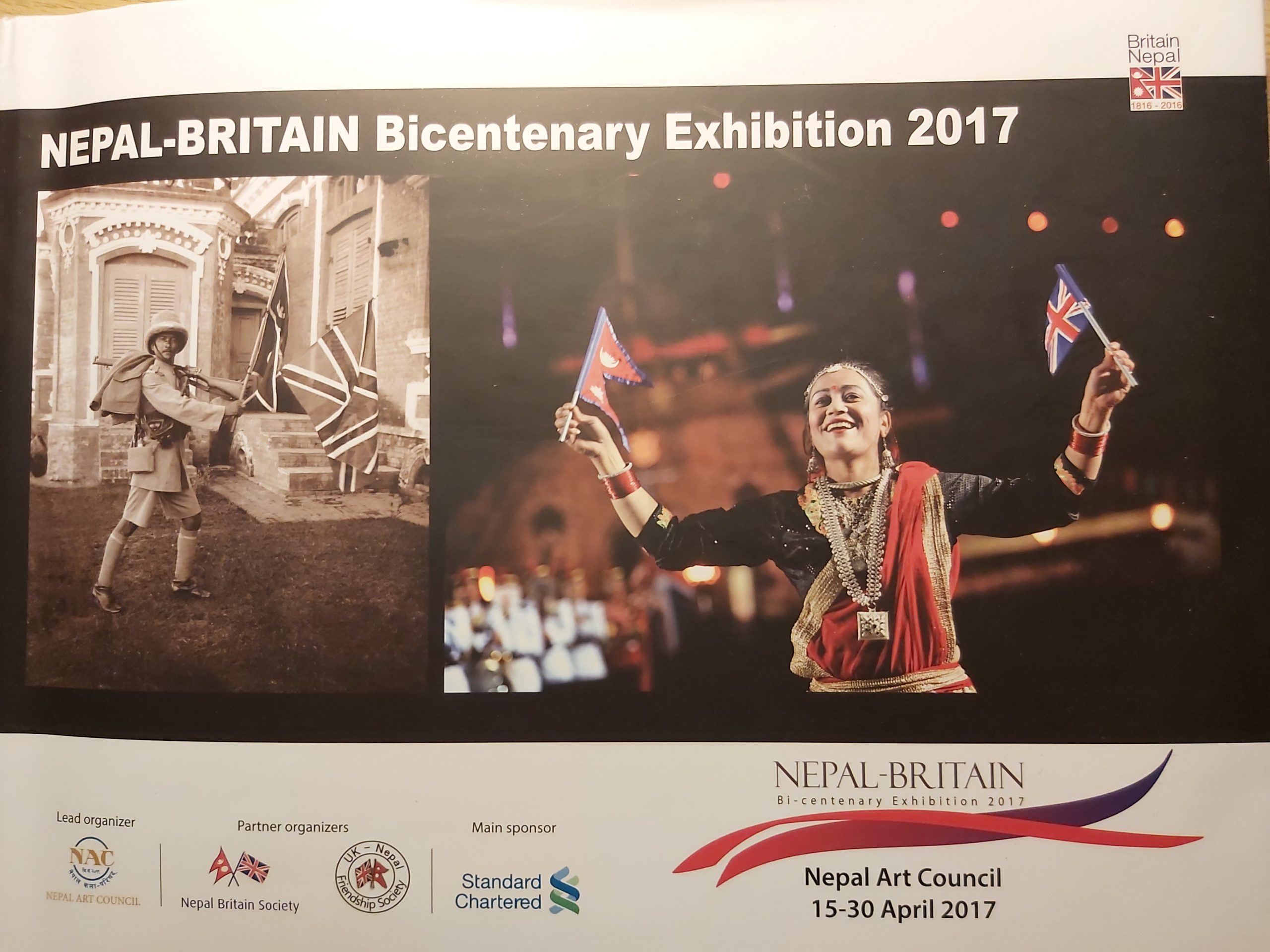 Although unfortunately the FCO could not provide any funding or support for the crucial UK dimension of research and content gathering, but the UKNFS was pleased to see in the final phase of project, relating to the exhibition launch event in Kathmandu at the NAC Building, the British Embassy Nepal and British Council Nepal were proactive in support as the news article above indicates.

In turn the NAC – UKNFS key UK research and liaison component of the core project meant that the exhibition research resources and experience was the catalyst for the UKNFS creation of the important Britain – Nepal special relations & friendship information resource PDF, referred and linked to above.  For this as mentioned a number of formal dedications of support were provided.  Of these the UKNFS is very pleased to provide that of Ms Joanna Lumley OBE, FRGS:

“Ayo Gorkhali” (Nepalese: “The Gurkhas are coming”) – traditional Nepalese rallying cry, used to celebrate the UK government’s decision to give all Gurkhas who served in UK armed forces the right to live in Britain.

I wish the UK Nepal Friendship Society all success;  with the creation of this UK – Nepal legacy, celebrating two hundred years of the special friendship and relationship between our peoples, many little known facts will emerge, binding our two countries ever closer.

This will only enrich the development and deepening of that relationship; and the special mention of the Gurkhas demonstrates what they have brought, and continue to bring, to the security  of the UK in times of war and peace, as matchless warriors and incomparable peacekeepers.

This wonderful resource will be used widely in the UK, thanks to the support of those agencies with responsibilities to furthering links between Nepal and the UK.    Its contribution will be of the greatest importance, and we look forward to the fascinating historic images initiated by the Nepal Arts Council and supported by UKNFS.  This is a brave and wonderful project and I commend it with all my heart.

In turn, the PDF thematic information resource (link above) was a key factor in enabling the preparations that eventually led to the creation of this website and accompanying book.