A very brief introduction of some need to know topics on Nepal and its peoples, for a background to the UK Nepali community. The following topics are covered in this section (below) of the website:

About Nepal and its Peoples: 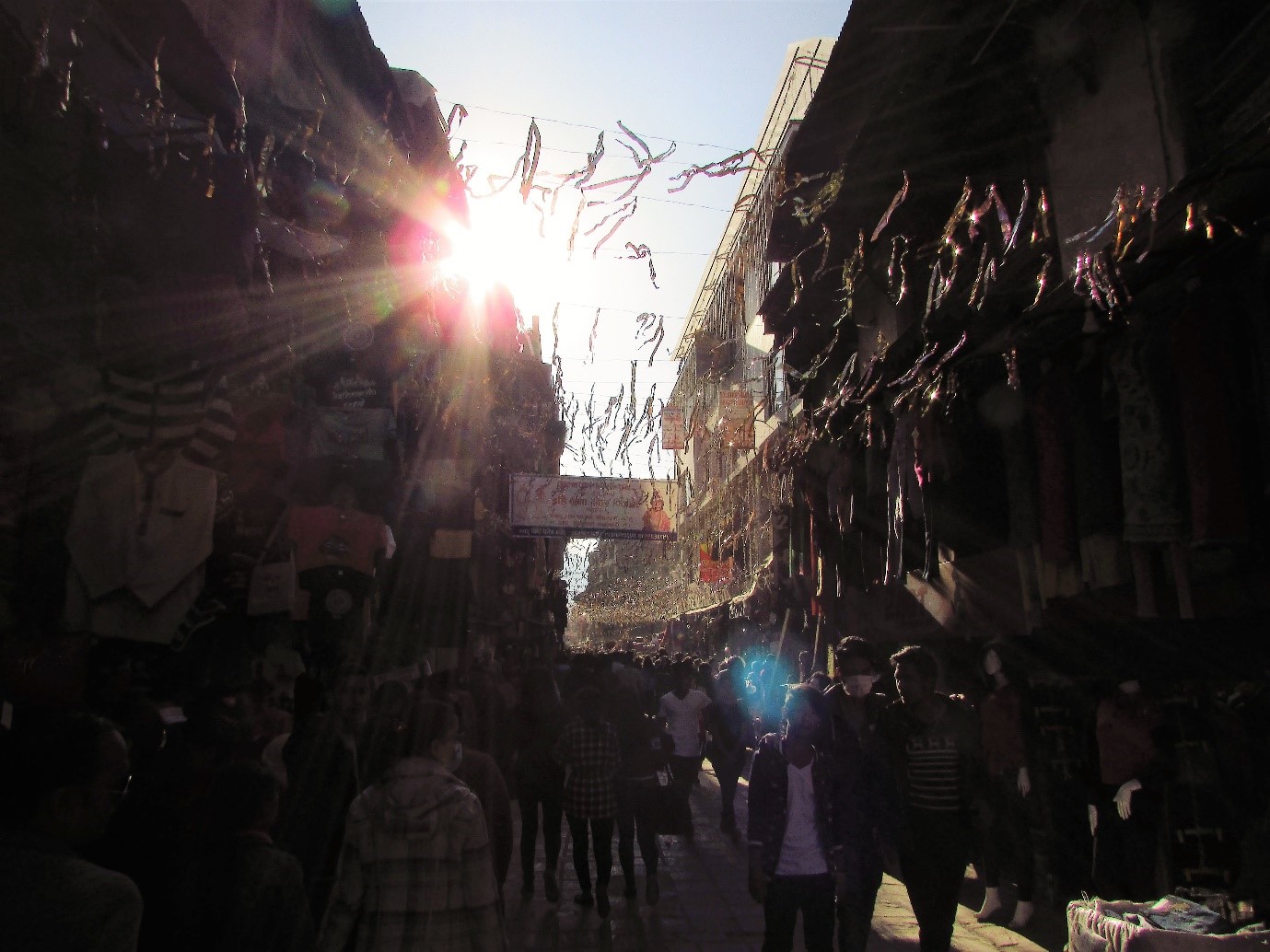 Nepal (Federal Democratic Republic) is a landlocked country located between the Himalaya to the north and the northern part of the Gangetic plains to the south (this part of Nepal is known as the Terai, and includes the birthplace of the Lord Buddha, Lumbini, and the famous Hindu pilgrimage destination of Janakpur).  The capital is Kathmandu, comprised of three historic cities, Kathmandu, Patan, and Bhaktapur, in the Kathmandu Valley region (together the three cities constitute modern 2020’s Greater Kathmandu).

Double Pennant with sun and moon represented on red field with blue trim.

The official emblem of state and of Nepal Government and its departments and agencies: Red Rhododendron, national flag, hands of friendship and collaboration, white outline of national territory, and Himalaya background.

History and relationship with the UK:

Apart from Nepal’s northern/Himalayan territory, the country falls within the ancient Vedic cultural zone of the northern part of the Indian Sub-Continent.  Nepal was never a British Empire, or East India Company, colony or protectorate, but fought with the latter in the early 19th Century, reaching an armistice and subsequently established a special relationship with Britain and the British people, especially through the British Army – Nepali Gurkha recruitment and British Army Brigade of Gurkha relationship.  Much of the UK – Nepal history details of this information resource is found in a number of sections of the Gurkha component, and to a certain extent the Sherpa component too. 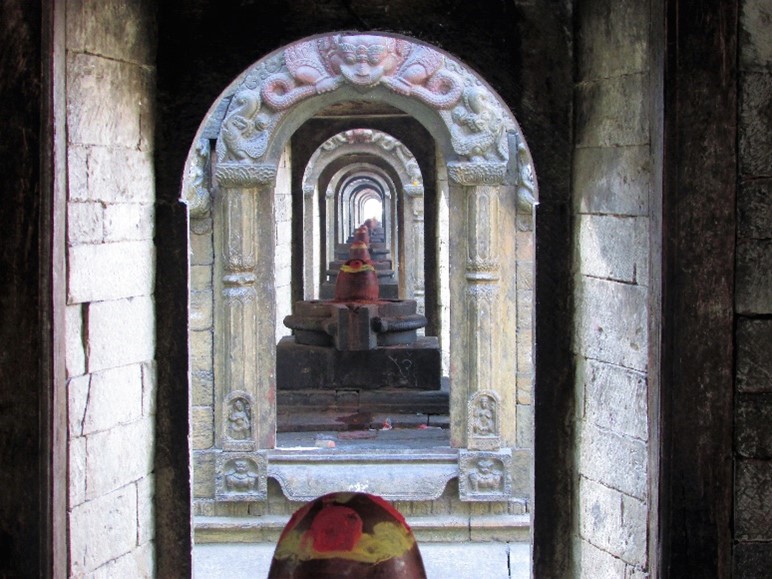 Some 80%+ of Nepal’s population follow Hinduism in various forms, 10%+ a number of forms of Buddhism, and the remaining population a number of different religions including shamanic and animistic ancient beliefs in the higher regions of the Himalaya. Hinduism and Buddhism take multiple and distinctly Nepali forms in Nepal, and it is a unique feature of life in the country that devout Hindus and Buddhists will visit and worship at each others temples and places of religious devotion.  This practice transfers to the UK Nepali diaspora, and other Nepali diasporas across the world.  It is said that in Nepal there are more festivals than days in the year, due to the numbers of different cultures, religions, ethnicities in what is a comparatively small-sized country.

Interestingly it is one of only a handful of lands where there are three+ different New Years’ celebrated: Nepali (around Mid-April), Sherpa (around end of February), and Western (1st January).  In addition months of the year vary, and so do the year calculations.  For example, in the Western Calendar 2020 becomes the Year 2077 in the Nepali Calendar, and in the Sherpa Calendar it is 2047.

Nepal comprises three topographical ecological and climate zones (ranging from an Alpine climate in the high mountains, to temperate in the central valleys, and subtropical in the Terai/southern plains): picture above of Solu Khumbu districts and Churi Gai Himali Cow, kindly provided by the Sherpa Association UK

Nepal’s Himalaya include the coldest in the world, and its southern/Terai lands amongst the hottest of Southern Asia. Accordingly, Nepal’s range of vegetation and herbs and medicinal plants comprise a degree of diversity that almost no other country equals in such a small territory. 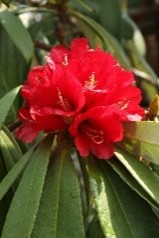 Nepal’s national flower is the Red Rhododendron, which provides a unique link to the Rhododendron as a beautiful and thriving shrub in a number of counties of Southern England – a unique link between the two countries. Because of its vast range of climatic zones, soils, and weather types, for its size Nepal counts as one of the richest countries of the world for medicinal plants and herbs.

The work of Dr Mark Watson, Head of Flora at the Royal Botanical Gardens in Edinburgh (RBGE) is of global importance in this field – the UKNFS records here as well that it was through Dr Watson that key support was provided that enabled the UKNFS to undertake the UK side of the Nepal Art Council, Britain – Nepal Bicentenary Exhibition, without which support from the UKNFS the exhibition would have been impossible.  The starting point for the latter was research work with Dr Watson at the RGBE, and at RBG Kew Gardens.  Here are two useful links on Nepal’s flora: https://vimeo.com/channels/996882/174797964    http://www.floraofnepal.org/

Still largely agrarian, tourism is the main income generator. Nepal (pre-Covid 19 impacts) has one of the fastest economic growth rates in Asia and the world.  The country still has an extensive diaspora sourced overseas remittances dimension to its economy: an important element of core income for many Nepali families especially in remoter parts of the country.

Peoples of Nepal – ethnicities and languages:

Just as it is essential for Nepalis to be aware that the UK is a Parliamentary Democracy and Constitutional Monarchy (head of state a monarch rather than a democratically elected president) and has four core constituent devolved administration components (as well as ‘overseas dependencies/territories such as the Falklands and Gibraltar) – England, Scotland, Wales, Northern Ireland.  So too is it important for all British citizens to be aware of the core particulars of Nepal.

These are that the country is a constitution-based republic following a federal system of parliamentary democracy and comprises some hundred plus ethnic minority and major ethnic communities.  The map below details the latter: ethnicity and clan and/or caste matter in Nepali culture and society and transfer to the UK in terms of preserving cultural identity. 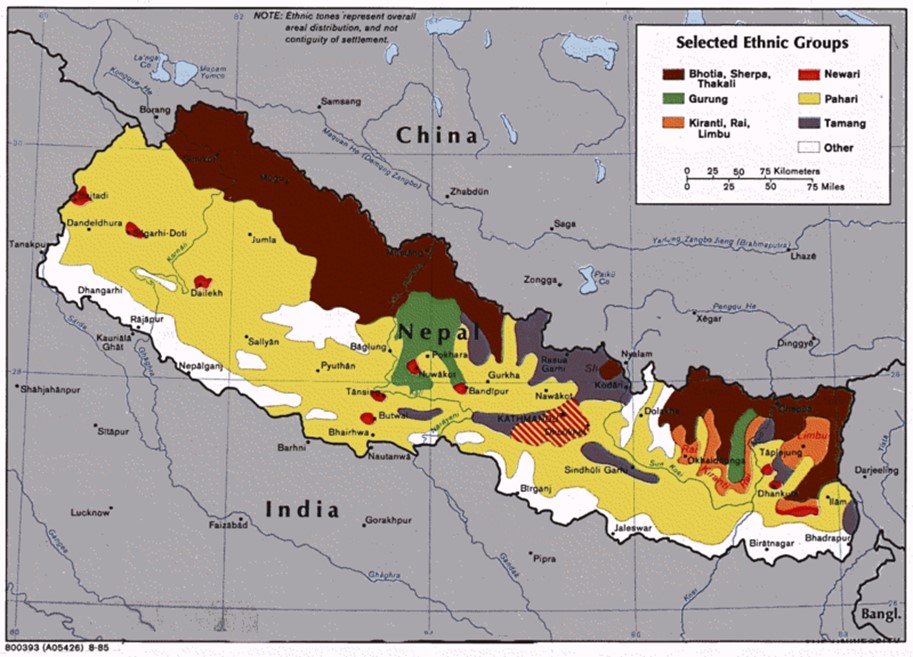 Source: Wikipedia *On the map the term ‘Pahari’ refers to the languages of hill dwellers in the main. The white areas on the southern border relate to ‘Terai’ peoples such as the Madhesi in the South-East on the India-Bihar frontier.

In Nepal’s 2011 Census (the institution of a ‘Census’ derived in terms of its introduction in South Asia, from the UK and took place every ten years: in terms of the year in the decade cycle when censuses are taken, this in Nepal is derived from and follows the British model of the first year of each decade, a little known fact of the depth of interlinkages of the two countries) it was estimated that there were some 126 ethnicities and caste groups linked to the latter.  In terms of languages spoken by the different ethnic communities, there were 123 recorded in 2011.  Of those languages 90% were spoken by indigenous peoples (in Government of Nepal recorded as Indigenous Nationalities), with some of the smallest ethnicities and their languages on the verge of extinction.  Associated with ethnicities and castes are broader ancient, traditional cultures and arts forms such as in music, song, dance, sculpture, woodwork, architecture, and costume as well as of course ethnicity-culture specific festivals.

Nepali is the official language of Nepal.  The three main language groups of Nepal are Indo-Aryan, Burman-Tibetan, multiple indigenous languages.   In terms of major languages spoken, the country has three which are: Nepali (also known as Gorkhali), Maithili, and Bhojpuri (both of the last being spoken mostly in Nepal’s Terai).  However, English is the official language of Higher Education (universities).